A come back story

This has nothing to do with sewing. But check out this cool picture my husband captured of me finishing the Shiner Beer Run Half Marathon yesterday. It was my first half marathon since having the titanium in my foot. 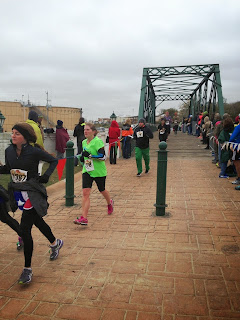 And I took 10 and a half minutes off my best half marathon time! To think how upset I was about the surgery, six weeks no walking and months of physical therapy when now I have a new and improved much awesomer bionic foot with real titanium bits!

My goal was to beat 2:15, but I had a few problems yesterday:

1. I learned what a headwind is. I thought I knew, but I had no idea.
2. Shiner has hills. Who knew? The best thing about a hill? When you are going up it, it blocks the wind!
3. Cows think runners are hilarious. I can't tell you how many cows would walk up to the side of the road and stare at us. Every once in awhile we would even get a heckling moo.

Overall it was a great race. We were met at the end with brats, live music and, of course, Shiner beer. I think the total number of runners was around 2,000, so for a small race it was a heck of a party! We didn't stay long though because of the weather. It was about 40 degrees (F), but that wind was just cutting through us. The feels like temperature was 29. 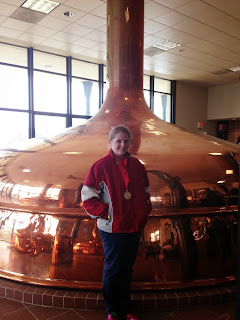 We did take a tour of the brewery, which was pretty awesome. And this is the only picture we got with me wearing my medal. 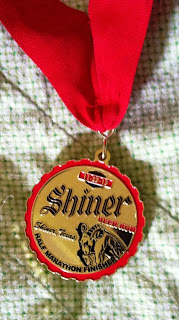 A great design if you ask me! 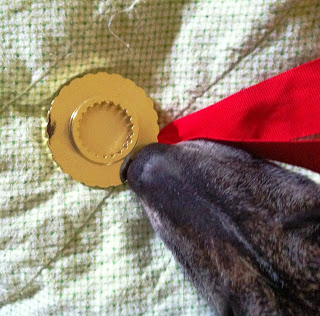 Oh good, a useful photo bomb of my sewing assistant pointing out the back of the medal has a bottle opener. Mr. Thinks He Can has not come around yet to me hanging this in the kitchen so everyone can bask in my glory while they open their bottles, but I think he will. 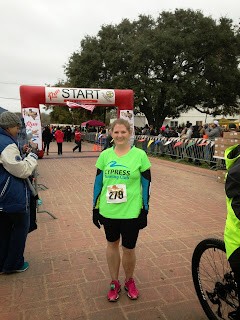 And a before picture at the start line. I never run in sleeves or pants, freezing weather, rain, nothing changes that. Yesterday was so cold the arm warmers and gloves never came off! It could have been worse though. There was a 60% chance of rain that never came. Thank goodness.

In other news I am finishing my third English Roses quilt. Bor-ing!