I will be frank. I still get mixed results when sewing with knits. I figured practice makes perfect, so I picked out McCall's 6559 for an easy two piece pattern to make a simple dress. I made it out of the cheetah print jersey I picked out that I was unsure of. I figured worst case it would wind up a nightgown. 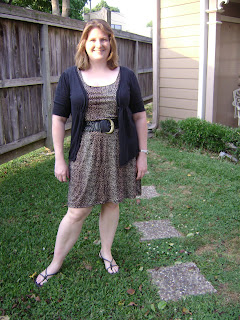 I freaking love it! I made it up in about an hour and a half too! It actually feels like I am not even wearing clothes. You may wonder where the value is in that, but as temperatures and humidity reach 100 in the next couple weeks wearing very little clothing is the way to go. 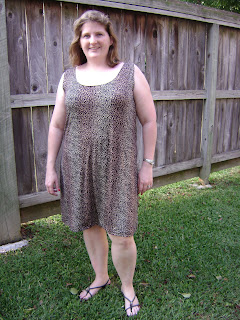 While I love the dress with the belt, I think you should see it by itself as well. I had to take in the top by 2 inches on each side, and I think next time I will just make a smaller size over all. I also raised the neckline an inch when cutting it out. It doesn't look very low cut here, but it could get scandalous. I feel like with this print on its own I walk the line of winding up on the local news talking about how a tornado blew my trailer 50 feet in the air. I think I would need curlers in my hair though. 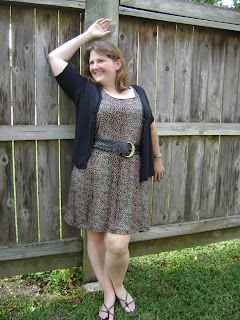 Hehe, I had to include this picture. Mr. Thinks He Can said stand back against the fence and put your hand up. This is what that translated to me. 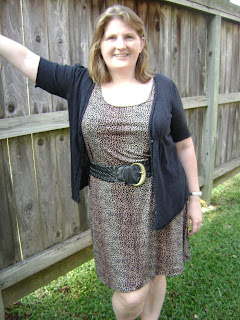 This is what he meant for me to do. :-) This dress is a winner. I'm going to make it smaller next time, but it is cuter than I could have imagined. I think I would like to make it in the maxi length as well. I shared some tips while working on this dress here. 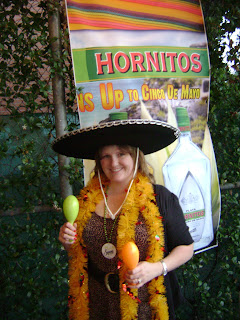 So dress and I went out on the town last night. It was Cinco de Mayo, the day Mexico celebrates the battle of Puebla in which they defeated the French in 1862. Houston is 44% Hispanic according to Wikipedia, with about 400,000 unaccounted for illegal immigrants, which most are Mexican. With those stats, we as a city embrace this Mexican holiday by eating Mexican food and drinking Margaritas. We celebrated at La Tapatia. 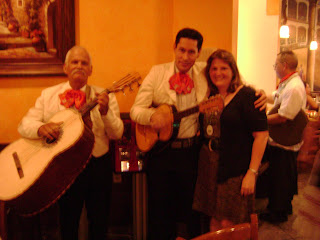 Here is the dress and me with the Mariachi band. They were very nice. 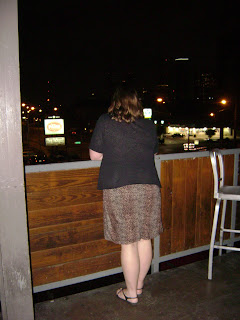 In other news we got an offer on the house. All that home decor sewing I did basically staged the house. I have never lived outside a five mile area in Houston. Here I am looking from a balcony at downtown. My house is about a mile from here. I always thought if I moved from this part of Houston I would be moving out of Houston to another city or state. Since I moved here 10 years (geez!) ago this part of town has boomed. Prices have sky rocketed and we need space. We can get more for our money if we head out of the city. So Mr. Thinks He Can and I thought it would be a good night to go check out a couple places we wanted to see before we go while the crowds are at the Mexican restaurants. This place, Sawyer Park, was OK. 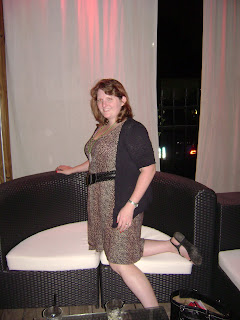 This place, called Hughes Hangar is a really pretty ice house next to the cemetery where Howard Hughes is buried. I know kind of weird, but cool place. It was still Cinco de Mayo, so the music was super loud salsa type music with The Aviator playing in the background. I wonder if Mr. Hughes likes that going on next to his eternal resting place... 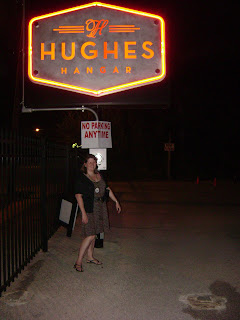 Me and the dress checking out places we never got around to exploring all the years we lived here.